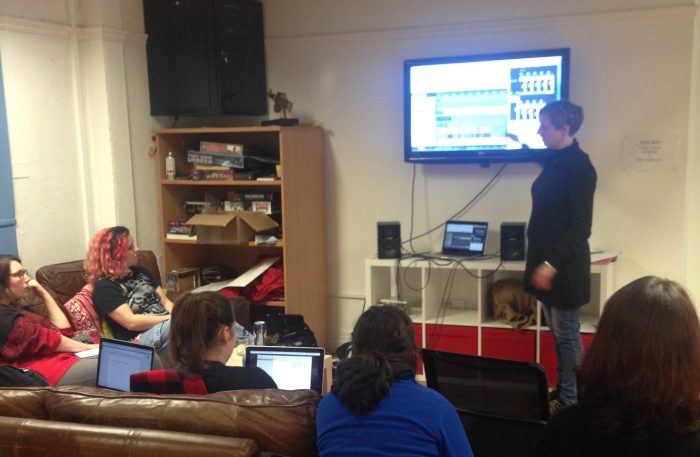 March 2017 First Tuesday meetup at bristolgameshub was on all things Audio, with a really useful presentation from Alison Bown about how to get started creating and editing sounds for your game. Alison has years of experience working in film and games; she was recruited straight from film school by Electronic Arts to work on games and is currently in the throes of an Interactive Narrative and Spatial Audio PhD.

We had a wide-ranging introduction to useful software and hardware, from free stuff to top of the range. I learnt that protools can be evil but necessary if you want to work in film sound, and that an iphone is a more than adequate recording tool if you don’t want to shell out for an ambisonic Zoom H2N with four microphones on top. We even covered how to make an ad-hoc sound recording booth – basically walling yourself into a cupboard with blankets or sticking a mattress behind your head.

Alison played us some of the sounds she has created over the years and showed us how she layers up from component parts; pretty much the same techniques are used in film and games but with game you need to know more about compression and chopping up files into re-usable bits. (That’s my non-tech explanation of what she actually said). She recommended we read “From The Shadows of Film Sound” by Rob Bridgett to get a good overview of sound techniques and how to use audio to good effect in games.

We covered sound fx, copyright, atmospheric sound ( randomised sounds on top of a base sound), memory, routing (a fundamental in film & games so I’ll be reading up on that), setting reverb in Unity, making MIDI sounds, file formats (mp3 vs wav vs .ogg), pitch/shifting, sound seeds (! another one to investigate further), and so on. It seems to be a lot about layering. I also learnt that stems are how you organise sound for a mix – I will be downloading myself a list of terms to bandy about when talking audio!

It was a mind-reeling comprehensive intro to lots of things, with time for answers to people’s more specific questions about their projects. Lots to think about and follow up, and quite reassuring to those of us who are muddling through and now find out we were doing things right. (I mean me, using my phone and audacity to record and edit).

Alison recommended we think about using Wwise middleware (similar to fmod) that works with Unity and Unreal games engines, and sent us a link to a “Great Blog with loads of tips including why to use Wwise” from annesoaudio:

Here are a few more links from Alison ~

Wwise Demo in action: Twenty mins in, show and tell of intricate Wwise project in game.

Thanks Alison – slightly fried my brain but a really useful evening.

nb we are open to suggestions for topics for First Tuesdays, just join our meetup group for women working in games and post an idea.